Bright and early Wednesday morning they rose and came to a meeting. You don’t have to be an optimist to do that, but it’s nice to be an Optimist. The Chippewa Falls club of Optimist International met for a 6:45 am meeting hosted at Spectrum Industries.

Optimist International is an association of more than 2,900 Optimist Clubs around the world dedicated to "Bring out the best in kids." Adult volunteers join Optimist Clubs to conduct positive service projects in their communities aimed at providing a helping hand to youth. With their upbeat attitude, Optimist Club members help empower young people to be the best that they can be.

Approximately 20 members of the club met in the Chippewa River Room in the First Avenue facility with coffee and pastry to start their day. A prayer began the meeting followed by members reciting the Pledge of Allegiance and birthday wishes sung to observe several members births. Some business matters were attended to and then off for a tour of Spectrum’s First Avenue’s facility lead by Dean White, Executive Vice President of Manufacturing and Dennis Barka, Vice President of Process Control. Scott Dorn, Executive Vice President of Sales/Marketing then presented a slideshow overview of Spectrum before the group recited from the Optimist Creed and the meeting was adjourned. 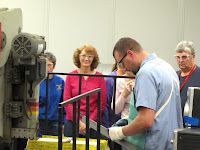 President said that on a yearly basis, the club holds quite a few projects and programs to help the community’s youth. Among the list are the Childhood Cancer Campaign, essay contests, dictionary donations and scholarship, as well as a variety of community events.

When asked how many members make up the Chippewa Falls Club Cunningham said there were about 32, but she paused and optimistically said, “We’re always looking for more members.”
Discover More Blog Posts Here